You Can Be the New Owner of Disable Comments WordPress Plugin 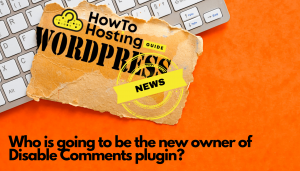 The Disable Comments WordPress plugin is one of the most popular plugins for WordPress, with more than a million users and many five-star reviews. Despite its success, Samir Shah, the plugin’s owner, has decided to part with it. However, instead of selling it, his plan is to auction it for charity, reports WPTavern. The highest bidder will make a donation to Effective Altruism Funds (EAF).

The Disable Comments plugin was first released in 2011. Back then, Shah was working professionally with WordPress. The initial use case was with corporate clients who didn’t need commenting on their websites.

How does Disable Comments work? Its main goal is disabling all commenting-related functionality. When enabled, the plugin conceals comment links from all menus, removes comment widgets, hides the discusion settings screen, disables outgoing pingbacks, and commenting on the front end. The plugin allows administrators to disable the comment functionality across entire sites. However, users can also administer the plugin based on a specific post type. They can also disable comments across the network in case of a multisite installation.

Why is Shah parting with his plugin?
“After repeating this implementation on several projects I ported it to a plugin. The plugin became popular very quickly so it turns out this was a common use case,” Shah explains. Because he hasn’t used WordPress professionally since 2016, he has been maitaining the plugin in his free time. In his own words:

In the last year or two I’ve found it hard to keep up with the maintenance of the plugin. I’m increasingly unfamiliar with both the WordPress core (major changes like Gutenberg, for example) and with newer versions of PHP. It is time to find a new owner who is actively using WordPress.

Since Shah never intended to make money off the plugin, it has always been free to use.

“I have however received a number of financial offers for it over the years (presumably because people value the large user base), and so the idea I had was to auction it. The highest bidder would pay their bid to my preferred charitable organization, and send me a receipt as proof of donation in exchange for ownership of the plugin,” he added.