VPS Hosting is rapidly growing as an industry, and we are going to show you statistics for 2022 and beyond, as well as explain the latest trends, predictions and why the industry has an upsurge in sales from users and enterprises alike. 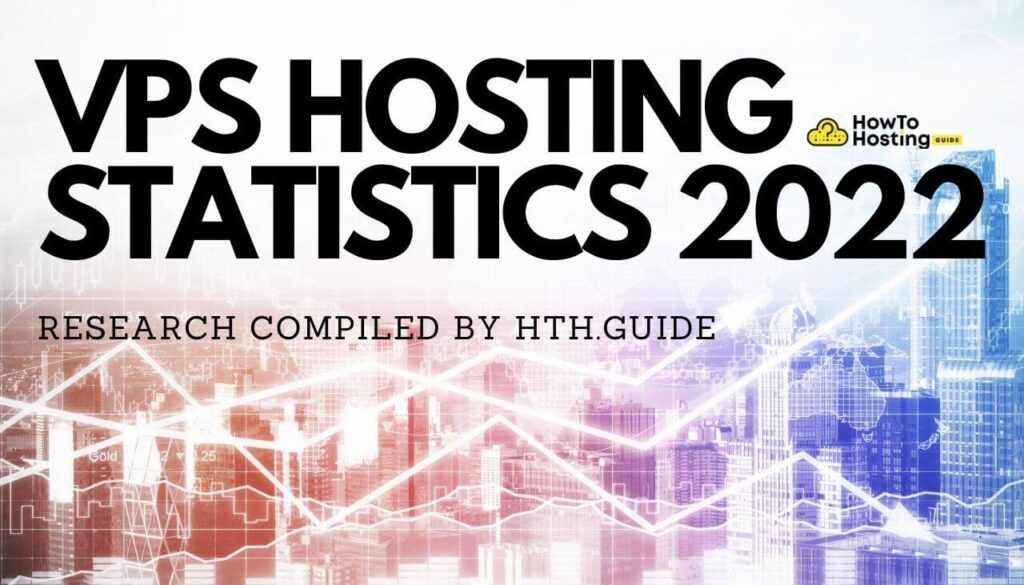 In today’s world, the Internet is a major part of people’s lives. Since the pandemic has forced the world to shift to a more digitally-oriented future, hosting services are sought out more. This has increased the global demand for Internet and hosting usage.

What Is VPS Hosting?

VPS also known as virtual private server or a virtualised machine is the type of environment which aims to imitate a dedicated hosting service in an isolated and shared environment. To simply explain this, it is just like dedicated product with same capacities, only in a virtual environment.

One of the main benefits of this type of hosting service is that it gives you the opportunity to host your own website and all of its files and data on a secured virtual drive, that is separated and gives access to nobody except the administrator. From security standpoint and privacy-wise as well, this allows you to do all of your tasks as you would on a dedicated server, but cheaper and more private.

Another benefit of this type of hosting is that once you purchase the service from the hosting provider you have selected, you immediately get your own virtual space in the virtual server. Instead of having to wait for a team to set up your dedicated server, here you instantly get access to all of your site files so you can easily begin using your hosting service without unnecessary time or wasting money.

Most customers of this type of hosting are in the segment that has a demand for service that is as much close to dedicated hosting as possible, but in reality meets the requirements for VPS servers. Another benefit is the high-level of customisability – as a customer you choose how much space you want, according to your specific website needs and end up being exactly how much you use. You have also the ability to customize your operating system and everything that is on a server level as it is with dedicated.

The total worth of the web hosting industry used to be around $70 billion, according to Global Industry Analyst. In this industry, reports show that a growingly higher number of users are in demand for setting up VPS Hosting services.

Experts from GrandViewResearch have made a forecast about the hosting market. According to their research the Compound Annual Growth Rate (CAGR) of the hosting industry will be 15.5% until the year of 2027. 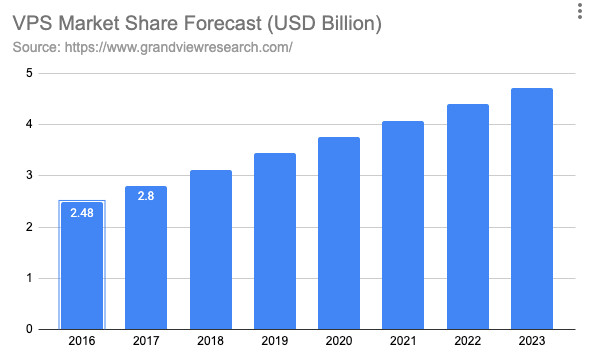 When a deeper examination of the market share of this particular type of hosting in comparison to others, a quick establishment has been conducted that VPS hosting is expected to expand with a rapid rate compared to how the whole market is growing. Managed Virtual Private Server is the most widely-used form of VPS and as such has a CAGR of 16.5%.

Currently, the Shared web hosting segment had a 37.64% share of the market. Dedicated hosting is with 27.9% market shares, followed by Collocated hosting with 27.9%, Reseller with 13.6%, and VPS with 10.3%. VPS will be the fastest growing in the next 3 years: 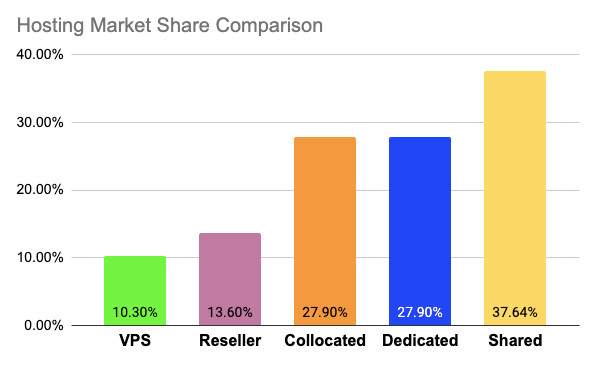 Data centers consume about 1% of the world’s electricity.

As VPS Hosting derives physically from data centers, it is important to review them. The year 2017 saw a peak of roughly 8.6 million data centers, while numbers in 2022 decrease. Here is how the percentage by country looks like in terms of how data centers are spread across the world: 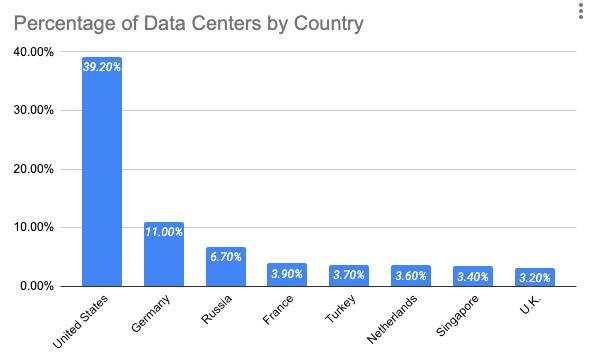 As the Internet expands with more domains bought from customers, logically more data centers are needed. However, the maintenance of the data centers is costly and requires a lot of energy. This has a negative impact on the environment.

Many Data Centers still use Hydrofluorocarbons, including R-134a and R-410A for cooling.

They should use CO2 or other, greener solutions, instead. More eco-friendly renewable energy sources for data centers are on the verge of being built. This is only a part of the solution, but also, data centers are being used in a more smart way, decreasing their actual number.

That is due mainly to the migration of smaller, in-house centers to data centers operated by bigger hosting providers.

The carbon footprint of the Internet accounts for 3.7% of global greenhouse emissions.

Currently, there are some hosting companies that take up a significant share of the VPS market. The Global Market share for VPS Hosting is lead by GoDaddy, taking up about 23.33% of this specific market. DreamHost is second with a huge difference, having only 1,46% of this market.

However, recent data discoveries show that it appears as if customer satisfaction may differ among popular hosting companies in an overall statistics research we performed.

If compared based on a research we have made about 363 hosting companies concerning customer satisfaction data, taken from TrustPilot and HostAdvice, which was gathered by hth.guide, based on the star-rating mechanism and information extracted from multiple credible sources, the following groups among companies were formed as a result:

Graph-wise, these statistics suggest the highest number of customers being decently satisfied with an average score between 3.1 and 4.0. When the results of the analysis conducted were ranked, here is how they would compare to one another: 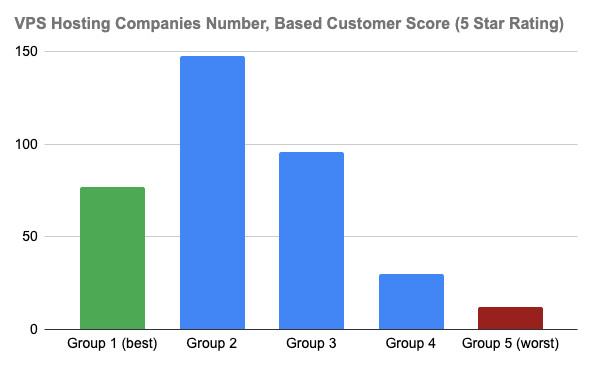 As clearly visible from the chart beneath, the groups with the most average score 2 and 3 amount up to 148 and 96 companies respectfully. They are closely followed by 77 companies, which were rated the highest customer satisfaction score of 4.1 to 5.0. These companies were the following:

When these companies were summed up in a more detailed look of the customer score, the following chart can establish the number of companies that reportedly have earned a maximum customer trust, given if the data provided is mostly objective: 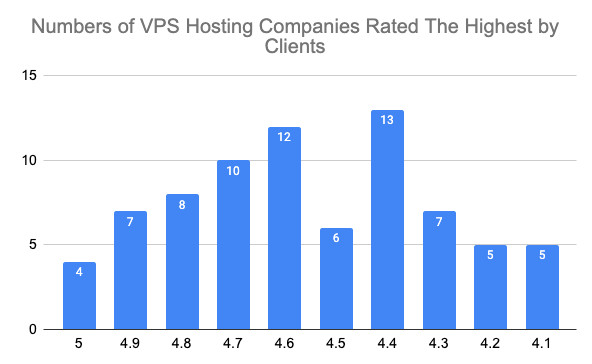 Interesting information can be gathered by this specific research in terms of comparison primarily between companies, existing in the global marketplace in the VPS segment, like GoDaddy and DreamHost, which were mentioned beforehand to take most of the VPS hosting market. It seems that both retain a high score in terms of customer satisfaction with DreamHost leading with a score of 4.7 stars over GoDaddy with 4.4, which occupies a significantly higher percentage of the VPS hosting market.

How Has the Demand for Hosting Changed Since the Covid-19 Pandemic?

VPS is now a faster hosting service, as it now offers Edge computing. Edge computing is where data is stored and computed where it was initially received from a device. This offers more speed and reliability, while the price is amped just a bit more. 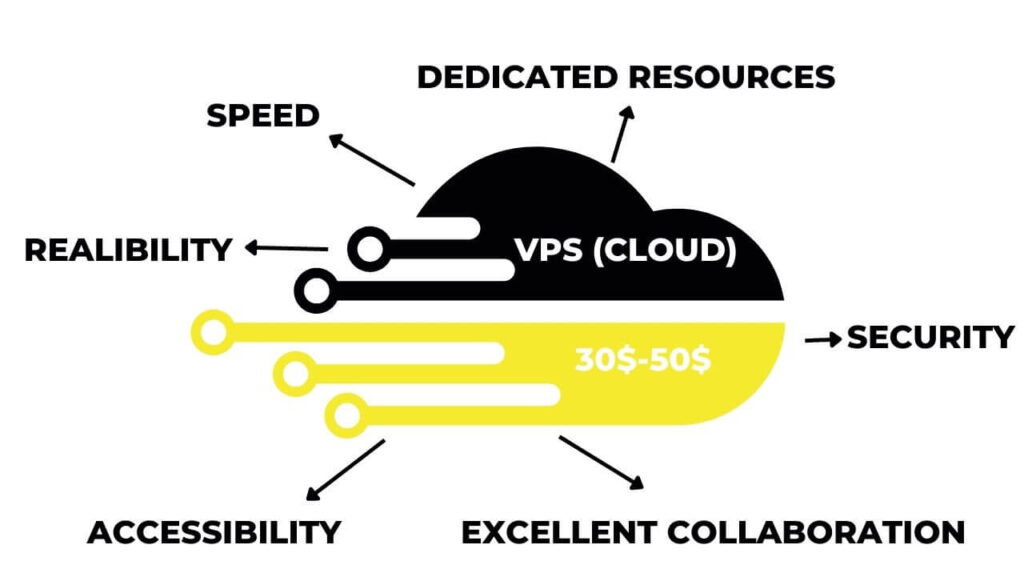 Edge computing refers to a distributed IT architecture where data is processed at the network’s periphery, or as close to the source as possible. Shortly said, it brings enterprise applications closer to data sources. The architecture goes well with cloud technologies, too, adding more to the value of VPS services in 2022.

What Improvements Can Edge Computing Bring to VPS Services?

Edge computing can increase the US economy with $500 million on yearly basis.

Edge computing is a decentralized service, reducing latency and increasing app performance. The US economy loses $500 million each year because of slow loading sites.

Did you know that even a one-second delay can reduce conversion rates by as much as 7% across US businesses?

Here are the main reasons as to why VPS (and edge computing, respectively) can help the US economy with improved conversion rates:

40% of all websites are in the US, while the Asia-Pacific Region turns to VPS.

North America has some of the World’s biggest data centers. No doubt, the market will keep growing there due to the decrease of private and small data centers.

China is the second country that has the highest number of domains registered after the USA.

In the Asia-Pacific, with giants such as Australia, China, India and Japan, governments turn to Virtualized Data Centers. That will be an important factor for the faster growth of VPS over any other region, according to experts.

Many companies are turning to Linux-based servers which allow them to offer better and more automatic services to their users. The Linux kernel with its KVM-virtualization technology allows for full virtualization which is hardware bound, more flexibility, and added security.

GoDaddy is the leader of the Web Hosting category in market shares, totaling 12% or 7,774,375 websites registered across the globe. A now close second is Cloudflare with 9.1% or 5,915,708 websites. 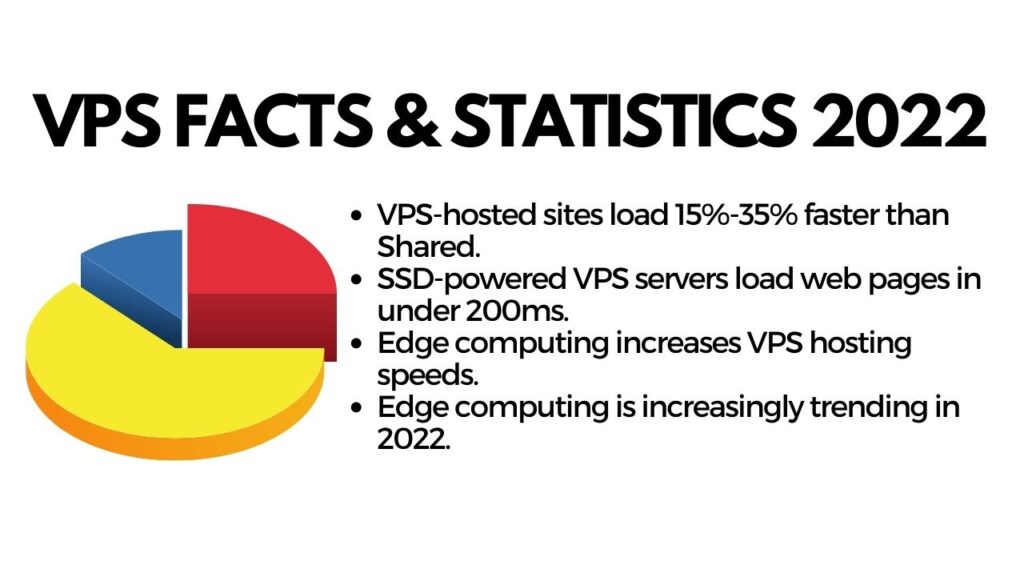 In a nutshell, VPS will be the fastest growing hosting service since recent years and will have a huge success in the Asia-Pacific region. VPS Hosting is predicted to continue growing at a CAGR of 15.5% until 2027.