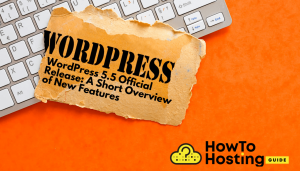 Today is the official release day of WordPress 5.5. What does the new version mean for the WordPress community?

Lots of new improvements mainly focused on speed, search and security, as well as more than 1500 changes to the block editor interface, at least 150 enhancements and feature requests, hundreds of bug fixes. Besides all these changes, the WordPress 5.5 version also introduces many changes which are not related to the editor. However, these changes are expected to have a great influence on how the CMS is used in general.

It is noteworthy that bloggers and developers are always welcome to try the WordPress Beta Tester plugin which enables you to upgrade your website to the latest Beta or Release candidate via the built in upgrader.

WordPress 5.5 introduces lots of changes to the WordPress Core. However, several features that were expected to be included in 5.5 were subsequently removed due to unresolved issues. As a result, full-site editing, navigation block, navigation screen, and widget screen are not included in 5.5.

WordPress 5.5: Changes in the Block Editor

The final release of WordPress 5.5 is expected to include ten versions of the Gutenberg plugin which will be added to the core. This means lots of UI improvements and enhancements, new features and bug fixes, bringing an entirely new feeling to the editing experience and performance.

Launching the block editor in 5.5 should introduce an upgraded interface which includes a simplified Block Toolbar, new icons, Block movers, improved drag and drop functionalities, and the ability to format multiple blocks at once. These are only a handful of the changes to be implemented in 5.5, all of which are aiming at bringing an improved performance.

As for the Block Design Tools, a number of design tools were recently added to the Gutenberg plugin. These are now being integrated in the WordPress core in WordPress 5.5. Some of the design tools ar Height Control and Background Gradients, padding control for Cover block, link color control for Paragraph, Heading, Group, Columns and Media & Text blocks, Custom Units and Custom Line Heights.

The new Inline Image Editing is quite thoughtful, being designed to enable users to edit images directly from the Image block more quickly and efficiently. It enables users to crop, rotate, zoom and adjust images without launching the Media Libary.

The Block Categories and New Block Inserter Panel in WordPress 5.5 display blocks and patterns by categories, which improves the editing process by making them easier to find.

What Are Block Patterns?

WordPress 5.5 also brings in the so-called block patterns, which are ready-to-use blocks with commonly used settings meant to help you add them to create layouts. It should be noted that there are already many patterns, which should then turn into plugins and themes. The main reason to use auto-update functionality is to prevent hacking and exploits. Many vulnerabilities occur not only in the WordPress core but also in plugins. Some plugins that are useful just at first sight, as later it turns out they also include malicious code that wants to steal information or inject something unwanted in your website.

For the past several years, many WordPress website owners found their own solutions to achieve auto-updates. However, the WordPress developers team did not implement these solutions, for one reason or another. Finally, they decided to do it with WordPress 5.5.

The addition of auto updates new is expected to reduce the number of compromised websites.
It is also noteworthy that the idea of auto updates has been discussed since 2013, but WordPress decided to take action in 2019.

For themes, the actions are similar. Go to the theme on Appearance, then select the Themes page, and click on the Enable auto updates link.
Another interesting addition to the latest version of WordPress is the new default WordPress XMS Sitemaps.

As you are well aware, a sitemap is crucial to the SEO of every WordPress site.
The latest version of WordPress comes with a built-in sitemaps feature which is enabled by default. This aims to create a new sitemap index file called wp-sitemap.xml. This file should contain links to all other sitemap files that are generated.

The default Sitemap feature is meant to support all post types, taxonomies (categories, tags and custom taxonomies), and author archives. Nonetheless, note that it is designed to only provide the basic required functionality of XML sitemap protocol.

If you are already utilizing a WordPress SEO plugin that comes with its own XML Sitemaps, you shouldn’t do anything else. The two biggest SEO plugins, All in One SEO Pack and Yoast SEO, have made the decision to continue administering their own sitemaps. The reason is that these plugins offer advanced customization features for higher rankings.

When a new version of any software is introduced, experiencing bugs can considered somewhat normal, and this update is not an exclusion. A discussion has been boiling over Twitter with WordPress users sharing their experience with the 5.5 update. Let’s see what people are generally saying in our article dedicated to the bugs and issues reported so far in WordPress 5.5.

A conclusion
All in all, WordPress 5.5 is a major release for the WordPress community, as it brings a ton of new implementations and improvements. This release is a proof of the excellent work that is taking place behind curtains. Despite the bugs that some users are experiencing after the update, the WordPress theme of developers deserves a huge applause for all their hard work.