WordPress is a giant and keeps growing with a huge rate. To be more specific, the famous CMS platform has already amassed over 8 million downloads just for the month of May, 2022, while that number is increasing with each new release. 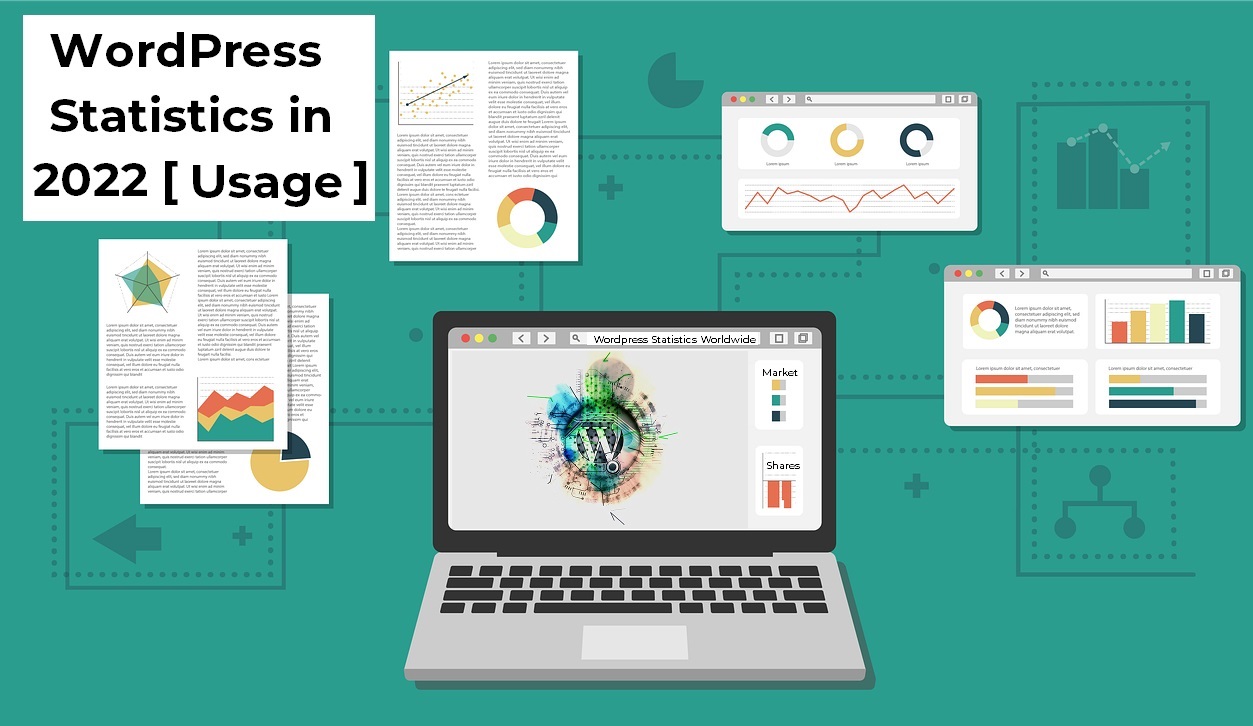 WordPress is the preferred content management system for most people wanting to launch a website. The number of WordPress websites in 2022 is 455 million, according to various agencies, who openly share their research. WordPress powers 38% of the most visited websites in the World.

14.7% of the top 10,000 sites worldwide are powered by WordPress, including the NFL, NBC, and CNN as well as other Fortune 500 companies, according to professionals of Manaferra, the search marketing agency.

Why Does WordPress Hold a Staggering 64.2% CMS Market Share?

WordPress is one of the most popular software platforms for building websites. WordPress has a CMS market share of 64.2%, which is the total percentage of all the websites using CMS platforms.

Being free and open-source, it makes it easy for people to use and modify their sites. WordPress has all the right tools for running a hosted WordPress website. People can get use of the WordPress platform by assembling a site quickly without having to code anything. You just have to register a free account, choose a theme and start publishing.

27 New Posts Per Second Are Published on WordPress Websites.

People are engaging with those posts on a regular basis, with around 77 million new blog comments generated by readers every month.

Compared to the statistic shared above, more than 650 WP websites go live each day. To paint a bigger picture, over 337,000 of the top one million sites are powered by WordPress.

Since there are about 1.93 billion websites globally, roughly every fourth website in the world uses WordPress.

Here are more statistics for the usage of WordPress:

In 2022, WordPress powers 43% of the web. All other CMS platforms pale in comparison to the usage of WordPress, and as long as WordPress grows in plugins, features, updates and community numbers, the usage will keep corresponding to that growth.

There are 59,497 free plugins in WordPress and according to NichePursuits website, with paid premium plugins, the total number of plugins should be well over 70,000 plugins.

The ease of access and the availability of so many plugins and powerful features are the 2 most crucial reasons why WordPress is the preferred CMS platform.

Here are some statistics about WordPress plugins:

Plugins add versatility to WordPress, and there are ones for shopping carts, contact forms, speed optimizations, SEO analytics, security and further customization of the WordPress experience.

The 19 most popular WP plugins have over 1 million downloads each.

The Top five are with over 60 million in downloads, and they are:

The nature and architecture of WordPress allowed for everyone to be able to contribute to the app, so they did, and WordPress outgrew its initial potential. Now there are almost unlimited plugins and WordPress-specialized hosting providers.

While plugins amass 52% of hacking entries, any WordPress site could be compromised with brute force at 16.1%, followed by core, themes, and hosting with less than 10% each as the entry point source. 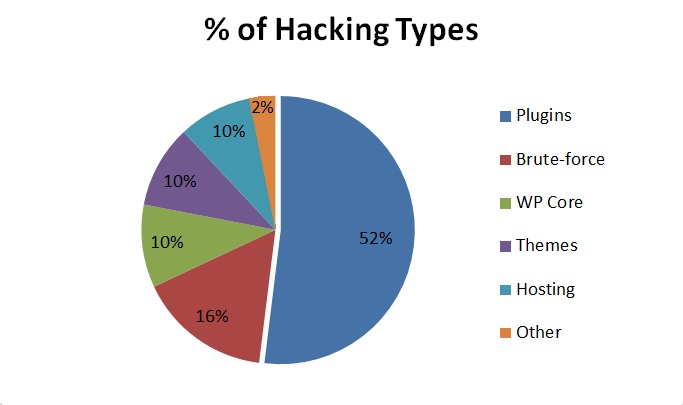 The average time needed to hack a WordPress site is less than 1 hour. That is the conclusion of a study from Sucuri, an online security company that specializes in protecting websites.

Wordfence is a WordPress security plugin that continues to be a must-have for anyone using the platform. In 2020 alone, Wordfence blocked 4.3 billion attempts to exploit vulnerabilities from over 9.7 million unique IP addresses, one of the most common methods of penetrating a website and stealing data.

WordPress hosting is a service that is best optimized for using WordPress. While, it can be any type of host, it best that is either a 1-click WordPress install service or the official WordPress.com host.

The top 10 Hosting Providers that have WordPress Support all have 1-click WordPress installation and they are heavily advertised on the first 3 pages of Google.

WordPress.com is a blog hosting service run by Automattic. You do not need an additional WordPress plan if you are using the official WordPress platform already.

WordPress hosting is specifically-tailored to WordPress and to optimize its performance and security. The service has features such as one-click WP installations, automatic updates and as your preference a Support team to help you manage it all.

WordPress has a high and wide reach across many geographical locations, which inevitably increase its market value and future growth.

WordPress blogs are written in over 120 languages according to the official statistics given by WordPress. WordPress is translated in over 160 languages overall. While only around 70 of those languages have full translation of WordPress, 52 of them are being more than 50% translated.

Below is a breakdown of the top 10 languages in WordPress:

This multi-language availability makes it easily readable to everyone. Hence, WordPress has a massive global market share.

With its market share, WordPress is the most popular and used CMS in the world. WordPress has held the dominant market share almost since its launch in 2003. 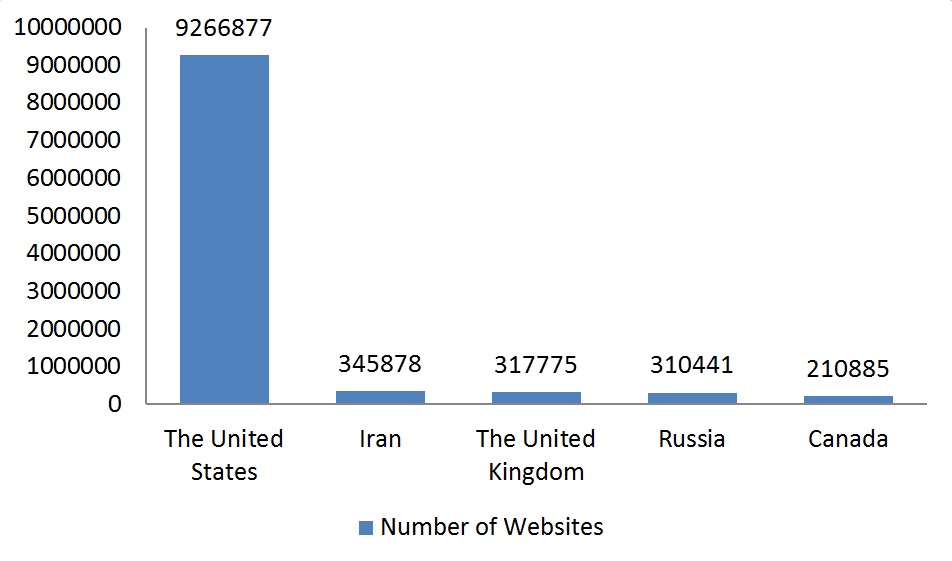 The WordPress market share has grown exponentially, even in the past few years. It not only powers small websites like personal blogs, but also goes beyond the basics, supporting large corporations like Bloomberg, Sony Music, BBC America, and even Sweden’s official website.

There are over 340,000 web hosting service providers worldwide.

The United States accounting for over 101 million hosted domains, more than any other country, while China has over 22 million registered domains. Most hosting providers provide a WordPress plan, if they are not small or niche ones. By 2027, China should be in the second spot in the World for number of domains hosted, including the ones with WordPress.

The volume of the Internet will grow from 33 zettabytes in 2018 to 175 zettabytes by 2025. That alone would increase the WordPress websites and their capabilities even more.

To sum up, WordPress has 43% Global Market Share and 64.2% CMS Market Share. There are 455 Million Websites on WordPress with over 1 million of domains registered every half of a year.

Around 60,000 Free WordPress Plugins exist, which result in up to 52% of hacking attacks and over 500 WordPress websites hacked daily. People prefer 1-Click WordPress Installations and Newspack for news websites.

WordPress is translated in over 160 languages, of which 70 languages have full translation of the CMS platform. Also increasing its popularity are the 1,069 WordCamps which take place across six continents, as well as all contributors, coders, and people who push WordPress forward.

References List with web resources used for our research: