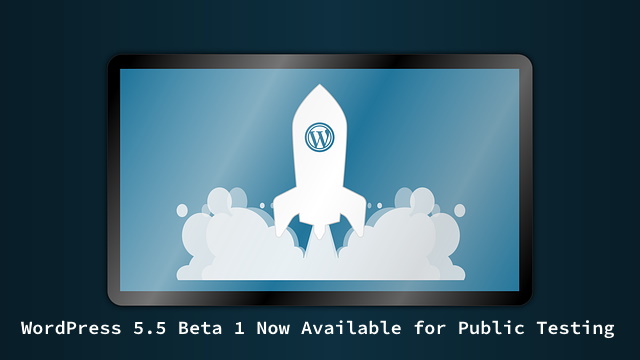 The first Beta of the WordPress 5.5 development branch has just been released for testing. Users that want to try this release should now that the software is still under development and should not be used on production sites. This WordPress 5.5 release will come with a lot of feature additions and important functionality, specially addressing the Gutenberg posts editor.

First Beta Of WordPress 5.5 Released: You Can Try It Now

The WordPress development has released WordPress 5.5 Beta 1 to everyone who wants to try the latest development release. This is particularly useful for website owners that want to see what’s new and improved in the upcoming major version of the blog software. We remind our readers that this should be deployed only on testing systems and not on production sites. A separate testing site is recommended as Beta stage software may feature severe bugs, issues with functionality and even security vulnerabilities. It is expected that any potential issues will be fixed in the stable version which will be the final WordPress 5.5 release.

At the moment there are two ways to try out the Beta version:

The WordPress 5.5 edition includes major improvements to the Gutenberg plugin which is used for the posts creation and editing. Some of the important new features include the ability to access inline image editing — newer options are to crop, rotate and zoom the photos content directly from the image blocks placement options. When creating pages the website owners can also now use block patterns that provide an elegant and easy way to layout contents. By default several templates are available.

Now WordPress also includes a device previews mode which enables the posts/pages preview to be shown on several screen sizes. The new streamlined block insert panel will make it easier to display categories and collections. In WordPress 5.5 patterns will be supported out-of-the-box. The block directory supports the installation of third-party blocks directly from the repository.

The editing process is improved by refining the mouse drag & drop operations, visually seeing how the block moves as they are interacted with, and implementing contextual focus highlights. Parents blocks can be selected and moved, multi-selection is also now available which allows the modification of several blocks at once. All of this is also complemented with a significant performance upgrade

The design toolset for the themes is expanded — blocks can now have applied backgrounds and gradients to layout elements like groups, columns, media, and text. One of the most important additions includes the support for more types of measurements — ems, rems, percentages, vh, vw, and others. This is very important for graphics editors as they can create custom multimedia content that can fit the blocks as they prefer it.

Other Important Features That Are Now Part of WordPress 5.5

In this new release of WordPress XML sitemaps are included and enabled by default. This is a very important factor when it comes to search-engine optimizations as it allows blogs to rank higher than those that those who do not have a properly configured sitemap. Previously administrators had to use third-party extensions or manually create and update these sitemaps.

With the updating of the major web browsers and adding of new standards, WordPress 5.5 will now include support for lazy-loaded images. This new functionality will not send out the images to the visitors until the viewport is approached. This will save bandwidth for both the visitors, the host (serve) and the Internet Service Provider. This may also speed-up the browsing of the site and improve the usability.

The WordPress team has integrated better accessibility options. The full list of implemented improvements include the following:

extensive alternate modes for list tables, link-link widgets can be converted to HTML5 navigation blocks, copying links in media screens and dialogue boxes can be done with a mouse click, disabled buttons are designed to look disabled, meta boxes can be moved with the keyboard, custom logo on the front screen will no longer lead to the front page, any assistive devices that are used by the visitors can now see the relevant status messages in the images editor screen, shake animation will indicate a login failure and error prefixes have been removed from the error notice

An additional feature that is implemented is the updating of plugins and themes by uploading a ZIP package. WordPress site administrators can have more control of redirect permalinks and important packaged external libraries have been updated.

It is expected that the final release will be launched on August 11 if the schedule is followed.